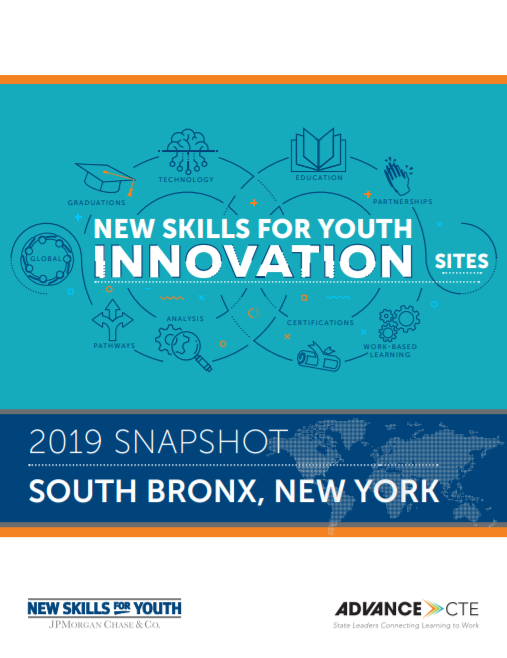 Launched in 2016, JPMorgan Chase & Co. New Skills for Youth (NSFY) is a $75 million, five-year global initiative aimed at transforming how cities and states ensure that young people are career ready. The local investments from across the world - Innovations Sites - aim to identify and implement the most promising ideas in career education, with a special focus on communities with the greatest needs.

In South Bronx, New York 23 percent of youth are out of school and out of work. Among those working, half are employed in low-paying jobs. To change the trajectory for these learners, JPMorgan Chase & Co. has invested in four initiatives working to increase meaningful work-based learning opportunities for South Bronx students. Each South Bronx initiative has its own set of goals focused on specific outcomes, but all are collectively working towards creating equitable systems change so that more learners have access to living-wage career pathways.

This snapshot profiles the work YouthForce NOLA in New Orleans, Louisiana is doing to develop a pipeline of skilled workers for high-demand, high-wage careers.

This snapshot profiles the work the United Way of Southeastern Michigan is doing to leverage Linked Learning to support learners in their college and career goals.

This snapshot profiles how Denver Public Schools CareerConnect builds a pathway for students while creating a pipeline of future employees with the knowledge and skills needed to excel in high-wage, in-demand industries.